Animal Advocates of Barnwell and Allendale Correctional Institution have teamed up to create a program where carefully chosen residents in the Character-based Housing Unit (CHU) are paired with a dog or cat (MeowMate) from the shelter. In addition to providing basic love and attention, the handlers help socialize the animals. They interact with everyone in the unit, and they get to play with other animals to learn skills needed to make them more adoptable. Residents teach basic commands to the dogs such as sit, stay, come, stop, lay, etc. The dogs and cats live in the cells with the residents, so they quickly become house trained, which again helps to make them more adoptable.

Canine CellMates in Atlanta is a similar program to our Meowmates/Muttmates program that pairs shelter dogs with inmates for training and bonding while dogs await adoption. 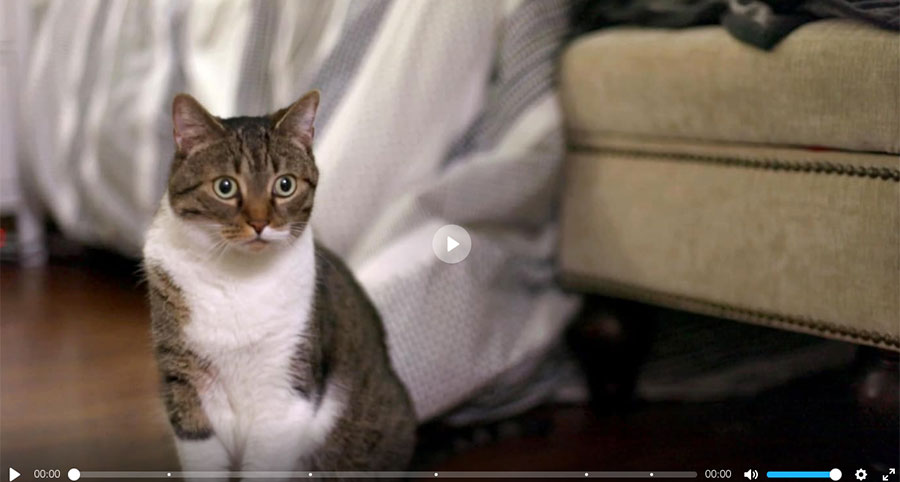 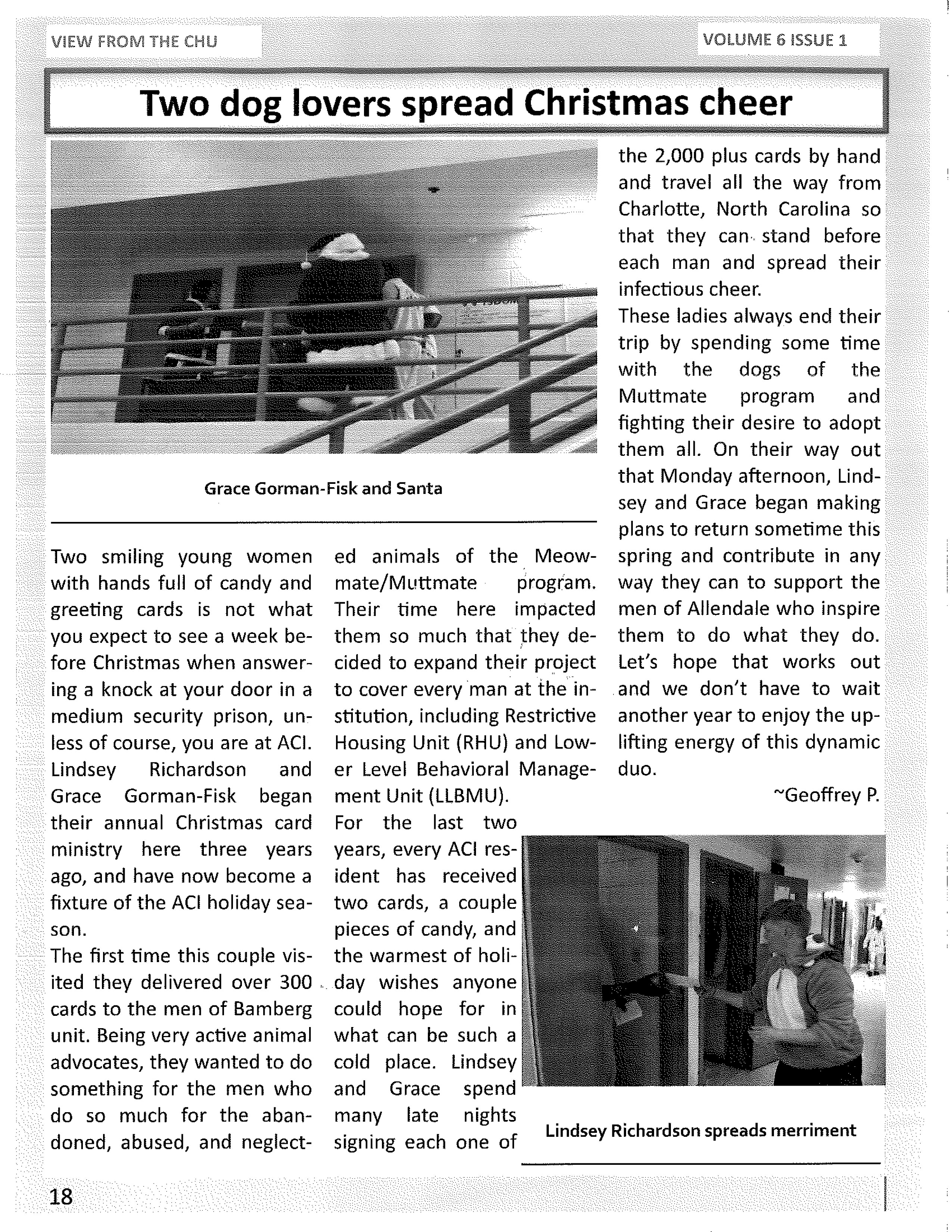 June 21st, was our Bi-Annual Pet Dad Recognition at Allendale Correctional Institution (ACI). The program was attended by over 200 people: 180 pet dads, Warden John Pate, Associate Warden Randall Williams, Lt. Stacie Ortiz (the ACI officer that is the facilitator for our animal program), 3 Animal Advocate board members, several ACI volunteers, as well as some ACI staff. All of the pet dads (180) that have participated in our program in the last 6 months were recognized. Special awards, such as the "Compassion Award" were also presented. Speakers included some of the ACI officers telling of the difference it has made having foster cats and dogs on the ACI yard. Two of the officers admitted that they had been scared of dogs their entire lives, but now love them! As I looked around the room, I saw many in the audience fighting back tears as 5 of the inmate pet dads spoke from the heart and told the impact the foster dogs and cats have made on their lives. They went on to tell how much they enjoy working with their fosters and want to make them the BEST dog or cat they can be so they will be adopted into a loving and forever home. Some of the foster dogs demonstrated the tricks and commands that they have learned for the audience. It was obvious to all in attendance, that there are strong bonds between these dogs and their pet dads - especially when one of the dogs jumped up on and across the head table when she spotted her pet dad!!! All she wanted to do was sit in his lap - yes, all 80lbs. of this incredibly beautiful and affection dog! She is scared of loud noises, such as the sound coming out of a microphone, so she got spooked when someone began speaking with the microphone. All she wanted was to feel safe in her pet dads arms.......

Most of you never saw the 2 beagle siblings that were adopted last week because very soon after they came into our care they went to ACI to be fostered. It has been our experience that both the dogs and cats that we take into rescue from an owner do much better at ACI than at our center. To those of you that have never been to ACI, this may seem strange to you when I say that being at ACI is more like being in a home for these dogs and cats, but it is. For stray animals, our center is a haven, but for ones that have been pets in a home our center can be a very scary place. In the case of Tissa & Tab, their owner was an older gentleman with Parkinson’s and he could no longer care for his 2 furbabies. Asking us to take his 2 adored beagles was a very difficult and quite emotional decision, but one he felt was best for his 2 pets. When they came to the center and were placed in a run, they were very scared. After being taken to ACI and placed with their pet dads, they were happy & their true personalities emerged once again! Fortunately, the couple that adopted Tissa & Tab wanted BOTH of them, so their journey has been a good one – a Happy Tail!

The job of our WagStaff can be a very difficult one. Working weekends, working holidays, walking dogs in the rain, 100 degree weather, and when it is freezing cold is hard enough, but sometimes that is the easy part. Comforting owners that have to give up their pets, seeing and caring for some of the dogs & cats that have suffered horrific abuse and neglect is more than difficult, it is heart-wrenching. Both our WagStaff and our ACI Pet Dads are such a blessing to these needy animals and to our organization. Along with our veterinarian, Dr. Renee McHenry and her staff, they are the key to rehabilitating these cats and dogs so they will be adopted into loving homes. They are key to our success. In this season of thanksgiving, I know all of you will join me in being very thankful for our WagStaff, our Pet Dads, Barnwell Vet Clinic, Warden John Pate, Assoc. Warden Willaims, Lt. Stacie Ortiz and the rest of the ACI staff. All of these caring people make our MeowMate/MuttMate Program and our rescue efforts possible………..TOGETHER, we CAN make a difference!

As a former inmate of Allendale Correctional Institution (ACI), I was afforded the opportunity to participate in the Meowmate/Muttmate Animal Fostering Program. I feel it is important for me to at least attempt to describe the impact this life changing program had on me and the hundreds of other men I grew to know as we helped each other nurture and train the animals lucky enough to be sent to Allendale Prison.

I was incarcerated for nearly twenty-five years. During this time I was housed in some of the most violent institutions in the state, where the expression of any amount of human emotion is a dangerous liability. Compassion, empathy, sympathy; all of these sentiments inside of a typical prison environment would cause one to be labeled as weak, thereby drawing the attention of those who prey on the weak. Prisons tend to harden people and, after nearly twenty years of incarceration, I was about as hardened and antisocial as one can become.

This began to change with my participation in the programs offered at ACI, but only in a superficial manner. My behavior had changed, but who I really was and what I thought of myself was the same. Then, thanks to the innovative partnership between the Animal Advocates of Barnwell, SC, Friends 4 Life Center and the administration of ACI, I was given the chance to foster a dog.

The first dog I was assigned to foster was of a breed that I had always heard negative things about and, to top it off, was labeled “unadoptable.” As I grew to know and love my first foster dog, the experience forced me to question why I believed certain things about animals and people before I had ever even met them. My interaction with my dog also caused me to look inside myself and realize that, just as I had to adjust my countenance in order to receive a positive response from my foster animal, I needed to likewise make a change in the way I interacted with other people in my environment.

Animals know who you really are. I remember being told once that a dog is the best judge of character you will ever find, and I believe it. You have to be yourself when you are interacting with a dog and, after years of incarceration, many of us lose touch with our true self. We project a type of poisonous masculinity, devoid of any emotion and, after a time, begin to believe that person is who we truly are.

In order to get a positive response from a dog, you must soften your personality and assure the animal that you are someone they can feel safe with. Making those around you feel safe is also not something one spends his time developing while incarcerated. As a matter of fact, it is generally considered better if people don’t feel safe around you! In a short amount of time every man that fosters an animal begins to experience this shift within himself. The change is so pronounced that even those around him and the family and friends he sees on visit notice it.

Prison encourages a person to care only about oneself. Fostering an animal forces a person to put his wants and needs aside and instead make the needs of his foster animal the priority in his life. I have personally witnessed permanent change in several hundred men as they fostered, trained, and loved the animals entrusted to their care. I have seen men clinically depressed no longer have to take the medication they once relied on just to make it through the day. I have also seen family’s brought back together through the connection experienced when a child, estranged from his father due to incarceration, adopts the animal his father trained and socialized in the hope that that animal could share some of the love he has for his loved ones but separation prevents him from expressing.

I made parole on the first day of spring in 2019. That is also the day that my first foster dog, Savannah, the one that was labeled unadoptable, made parole. She lays at my feet as I type this, and goes most everywhere I go. She is my constant reminder of the necessity of second chances, the importance of an open mind, and the power that empathy has to change not only your own world, but the world of every person you interact with in your life.

Thank you Animal Advocates for the many lives you have saved, four legged and two.